Code of Misconduct and Good Beerhavior

Code of Misconduct and Good Beerhavior

We, the members of the Peoria Hash House Harriers, in order to form a more perfect hash, establish enjoyment and ensure kennel tranquility, provide for the common virgin, promote the general happiness and secure the blessings of our GM’s for ourselves and our posterity and posteriors, do ordain and establish this Code of Misconduct and Good Beerhavior.

Superman wore glasses for a reason. Before and after the hash, we all live nerd lives.  Under no circumstances shall hash life and nerd life cross without the PRIOR consent of the individuals involved.  Meet a hasher in the nerd world?  Nod/smile, move along, unless you have PRIOR CONSENT to acknowledge them in hash fashion.  Do not OUT your fellow hasher.  Keep hashtags, gifts, and stories private.  This also goes for pictures and videos taken during hashes.  These are for hashers.  Keep them on your phone and to yourself or share them on the kennel’s page.  Public disclosure of hash activities may embarrass members.  One of our members is a Catholic priest.  Or is he/she?  You don’t know and no one else should either.  As such, no RANDO (random person) shall be invited to join a hash in progress.  They can be directed towards the public webpage for info or given a kennel card, if available.

II.   What happens at the hash is intentionally and respectfully offensive

Be very aware!  Hashes are rowdy, bawdy, raunchy, immature, drunken, themed fun.  As such, by attending a hash you are consenting to a suspension of standard public decorum in your vicinity, but this does not suspend our standards of decency.  Bigotry, racism, sexism, homophobia, etc. will not be tolerated.  If you can’t tell the difference between good-natured fun and intolerance, ask.  And if you’re asking, it’s probably intolerant.

III.   What happens at the hash happens with the consent of all involved

NO individual is required to participate in any activity they feel uncomfortable with.  ALL hash activity is voluntary, outside of following the rules laid out here.  As such, interactions with other hashers are expected to be CONSENSUAL.  Hashes by nature get a little rowdy and provocative and touchy-feely, and that's fun and sexy. But all of that must happen with full consent of the participants. We have zero tolerance for unwanted sexual activity both physically and verbally. It’s easy. ASK FIRST!  If you are certain your flirting, touching, ass-slapping, kissing, etc. will be welcomed by another member of our group, ask anyway. And if you're uncertain it's welcome, ask. Consent is sexy.  And if you are still confused on consent, refer to this handy guide: https://youtu.be/pZwvrxVavnQ
If you are feeling pressured or uncomfortable by a situation you are in: say NO.  Don’t let someone push you around or put you in a situation you don’t want to be in.  If you need assistance or witness someone else pressured or uncomfortable or unable to give sober consent in a situation they are in, please approach a named hasher from circle.  They will get the highest member of Mismanagement available involved ASAP.
IV.   What happens at the hash is designed to promote future hashing

Respect your fellow hashers.  Respect the trail.  Respect the various establishments we shall frequent and their staff.  Respect the people in the neighborhoods we pass through.  Respect the residences and properties of those hash-friendly individuals where we may engage in hash stops.  Respect public and private property.  Respect the laws of the land (unless your hare/harriette tells you to get a bit “trespassy” on trail).  Respect yourself.  The way to grow hashing is to make people want to come back and to make those around us want us to come back.

V.      What happens at the hash is responsible hashing

No one wants a DUI.  No one wants to post bond.  No one wants to pay a ticket.  Your fellow hashers are not your babysitters, but they do care.  Do NOT expect rides but do expect help in finding one if you ask.  No one under 21, except at hashes labeled as “family friendly/kid friendly” is able to participate at our hashes for a reason.  Let’s be adults when the hash is over, since we so rarely are during the hash.

VI.   What happens at the hash is a privilege

If you are found to be in violation of any of the above articles, expect to be contacted by a GM.  Do NOT expect to be invited or allowed to future kennel activities.

Popular posts from this blog 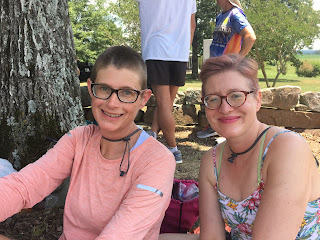 L et’s A ll V oluntarily Suffer Or how I somehow survived Vol State                 I’ve never written a race report before, and I’ve never really considered myself in a race before because I’ve never remotely thought that I’d be coming anywhere near a “podium” finish.   I’ve always considered my ultras as “challenge events” where the only two questions I asked myself were “Can I do this” and “If I can do this, just how fast can I do this”?   After trying the Barkley Fall Classic, being introduced to one Lazarus Lake, and eventually crewing for him for four days while he crossed the country on foot; when my wife planted the idea of us doing Vol State into my head, all I asked myself was that first question, “Can I?”   I should have been asking, “Just how much luck am I going to need versus actual skill?” Dumb luck proof number 1: my amazing wife, Mary Sue and her equally amazing friend, Jennifer                 As soon as it was decided, the training began in earne
Read more